It’s the same as 1 + 1 = 2: If patients floss daily plus brush after meals, it will equal a healthy mouth for years to come. Or will it? While the simple math equation is always correct, the same equation doesn’t always hold true in dentistry. Sometimes, even the best flossers and brushers wind up with problems down the road, especially since a toothbrush can only reach so far.

“I tell my patients, ‘We all floss, and we all brush, but it’s really quite superficial,’” explained Lynn Harasty, DMD. “Because none of us is brushing 3 millimeters below the gumline, it's impossible to affect the area where gum problems usually begin. But Perio Tray therapy can do that.”

To prevent future periodontal disease and encourage healing of inflamed gingiva, Dr. Harasty has been prescribing non-invasive Perio Tray therapy to patients at her practice, Complete Health Periodontics in Rutland, VT. Perio Tray therapy works to eliminate disease-causing bacteria in subgingival areas of the mouth that can't be reached with a toothbrush or flosser alone. “Because none of us is brushing 3 millimeters below the gumline, it's impossible to affect the area where gum problems usually begin. But Perio Tray therapy can do that."

Dentists have long suspected a direct link between periodontal health and overall health, and recent studies have proven that the presence of disease-causing bacteria in the oral cavity is directly linked to a multitude of health failures—everything from atherosclerosis, diabetes, and lung abscesses, to Alzheimer’s disease, colorectal cancer, and preterm births.

“I used to be an ICU nurse and I talk with my patients all the time about the mouth-body connection and what oral bacteria can do throughout the body,” Dr. Harasty said. “I go down the list of things that can go wrong with our bodies as a direct result of an unhealthy mouth,” she explained.

A Perio Protect provider for nearly a decade, Dr. Harasty estimates that she prescribes Perio Tray therapy to several patients each month with overwhelmingly positive results.

“One of my patients was a male dentist in his mid60s who told me he has the gums of a teenager now as a result of doing the therapy,” she said.

The only periodontal medicament carrier with FDA clearance, the Perio Tray is a non-invasive, customized homecare tool to deliver medication deep into periodontal pockets where floss, toothbrushes, and rinses can’t reach. Patients with gum disease report up to a 75% reduction in bleeding¹ after using the treatment.

The process begins with in-office impressions or scans, and then shortly after, patented, custom-fabricated Perio Tray appliances are sent to the prescribing dentist. Dentists prescribe an individual treatment plan and patients follow the plan at home. Patients only need to use the Perio Tray therapy for a few minutes each day.

Pockets Each Perio Tray uses a patented seal that holds the hydrogen peroxide at the site, deep below the gumline, gently cleansing the periodontal pockets. The hydrogen peroxide accomplishes 2 tasks: first, it kills harmful bacteria, and then it produces bubbles that release oxygen deep into the pockets. This oxygen creates a healthier environment for good bacteria while inhibiting the repopulation of unhealthy bacteria.

Additionally, the Perio Protect Method offers two universally welcomed side effects: whiter teeth and fresher breath. Most whitening treatments contain about 3% hydrogen peroxide, resulting in sensitivity issues for patients. The Perio Protect Method contains a lower concentration of hydrogen peroxide, 1.7% to be exact, which means that while the medication combats bacteria, it also gradually and gently whitens teeth without causing sensitivity. It also freshens breath, a benefit that all patients are sure to appreciate.

“I tell them it’s going to make their gums healthier and they’re going to prevent decay and harmful bacteria from forming,” Dr. Harasty explained. “It gives patients that extra modality to be able to control the bacteria that’s present in their mouth and play a role in maintaining good health throughout their bodies.” 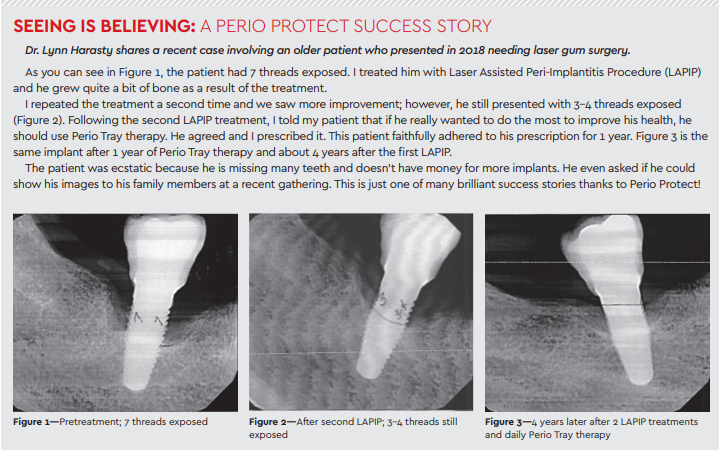 Treatment You Can Trust

The numerous benefits of the Perio Protect Method have been well-studied and proven over time. Since its introduction in 2005, tens of thousands of dentists and their patients have relied on Perio Tray therapy, and controlled clinical studies have confirmed its capabilities. Likewise, thousands of patients have attested to their success with the Perio Protect Method, as seen in a controlled clinical trial in which 100% of patients said they would recommend it to someone else, as well as the many testimonials available online.

← There’s an Easy Way to Treat Gum Disease…and It’s Not AntibioticsGum Disease & the Oral-Systemic Link: What Your Patients Should Know →